Major research areas for the Laine group include the synthesis and processing of inorganic and organometallic hybrid polymers and nano-oxide powders. Research in the hybrid area emphasizes the synthesis and characterization of nanobuilding blocks based on polyfunctional octahedral (octafunctional) and dodecahederal (dodecafunctional) silsesquioxanes (POSS) and nanocomposites therefrom wherein the periodicity and ordering of the inorganic and organic components are completely defined on a nanometer length scale. To date, POSS nanocomposites made include both aliphatic and aromatic epoxy resins, imides, amides, esters and simple hydrocarbon systems. Related work involves the synthesis of polyfunctional POSS with novel photonic or electronic properties.

Research in the nano-oxide powder area emphasizes the direct synthesis of single and mixed-metal oxide nanopowders by flame spray pyrolysis of mixed-metal metallo-organics. The resulting powders are characterized for their structural, catalytic (energy conversion in particular) and photonic applications. The effects of processing conditions on the catalytic, photonic and structural properties are of primary interest.

（1）We report here the functionalization of a series of phenyl silsesquioxanes including [PhSiO1.5]8, [PhSiO1.5]7[RSiO1.5] where R = Me, propyl or [PhSiO1.5]7[OSiMe3]3 or the double decker compound [PhSiO1.5]8[OSiMe3]4. Each of these cages was functionalized by bromination followed by Heck catalytic cross coupling. Sets of polymers were also prepared from derivatives of  [PhSiO1.5]8[OSiMe3]4.Photophysical characterization of these series of compounds allow one to establish the existence of a LUMO that interacts with the conjugated moieties linked to the cage presenting red emission shifts indicating 3-D conjugation in the excited state. This behavior has been reported before as indicative of semiconducting like behavior.1,2 However, only for [PhSiO1.5]8 and [vinylSiO1.5]8 cages and their derivatives. Here we demonstrate similar behavior where only partial cages are used and the first examples of conjugation in the ground state pointing the potential of these materials as new types of semiconducting polymers.

（2）Cycling lithium and sodium batteries containing liquid electrolytes often leads to uneven plating of metal on charging that generates dendrites that penetrate the polymer membranes used to separate anodes from cathodes that are coincidentally permeable to dissolved electrolytes. The resulting short circuiting leads to cell failure prompting investigation of ceramic electrolytes thought to mechanically block dendrites from bridging. The search for ceramic electrolytes that offer Li+ conductivities of 0.1-1 mS/cm has focused on LATP and c-LLZO. Unfortunately, LATP undergoes irreversible reduction of Ti4+ during cycling and c-LLZO is susceptible to Li dendrite penetration along grain boundaries.  One solution has been to use very thin films (5-200 nm) of gas phase deposited, amorphous LiPON to block this behavior. Unfortunately LiPON thin films offer Li+ conductivities of 10-3 to 10-5 mS/cm that mandate the use of thin films. We have successfully synthesized LiPON-like polymers in an effort to explore their utility in the assembly of ASBs. We report here that these polymers show ambient conductivities of up to 1 mS/cm and can be used to assembly ASBs with lithium sulfur cathodes and Li anodes that offer cyclability with energy densities of ≥ 750 mAh/gsulfur over 200 h and 100 cycles at 0.5C with > 90 % efficiency. 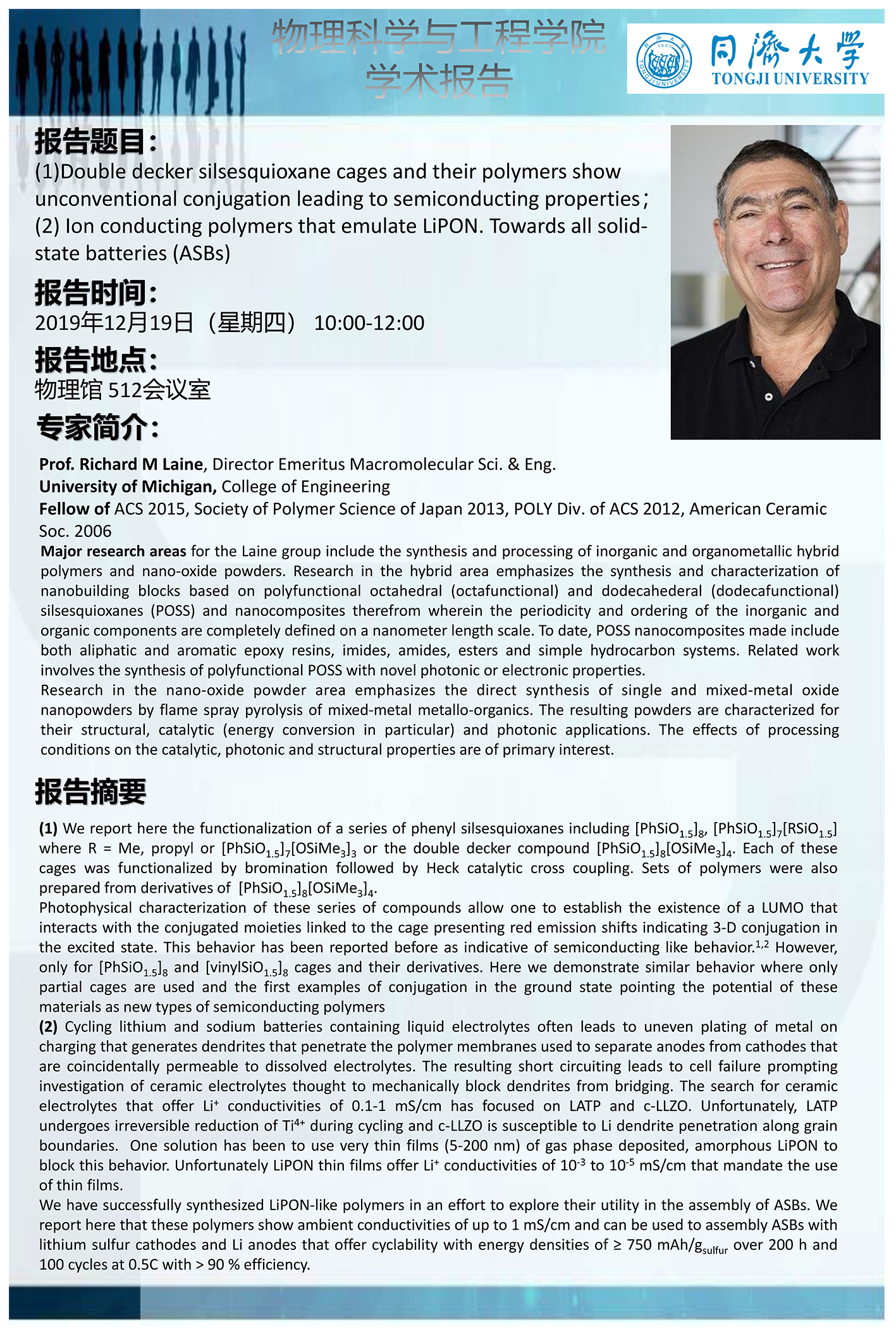